We are a multidisciplinary group of computational and experimentalist material scientists with different backgrounds and expertise. What links us all together is our favourite element, carbon.

Honours and PhD students are part of the team every year and contribute to our research with exciting projects like the development of the Carbon Potentials interactive online tool.

We have developed an online tool to easily compare the performance of different carbon interatomic potentials. This tool will help carbon scientists around the world to study the transferability of the potentials to ensure the reliability of the chosen potential for a given application.

We encourage other scientists to contribute their data so we can build a global carbon potentials database.

Carbide-derived carbons are a very interesting class of porous carbon materials that act as powerful selective sorbent for various molecules. This property makes them useful for a wide range of applications. A few examples are: electrode material in supercapacitors, catalyst support for fuel cells or membranes for toxic compounds removal in water, air or even in human blood.

We have simulated carbide-derived carbon structures mimicking the synthesis process with successful results and we have reproduced the graphitization process observed in the experiments. Revealing the unphysical nucleation of nanodiamonds in amorphous carbons

In this work, we examine a common practice to the widely-used Tersoff potential in which the coefficient of the upper cutoff is increased either to improve properties associated with fracture or to increase the fraction of sp3 bonding in high-density amorphous carbon.
Using Molecular Dynamics simulations, we show that this so-called Extended Cutoff Tersoff model leads to nucleation of diamond nanocrystals during annealing of amorphous carbon. We quantify the precise conditions under which diamond crystallites nucleate, and present data on the radial distribution function and pressure which highlights the unphysical nature of the diamond nucleation. Unphysical nucleation of diamond in the extended cutoff Tersoff potential, Molecular Simulation, (2017) (In press) A. Aghajamali, C. de Tomas, I. Suarez-Martinez and N. A. Marks

Which Carbon Potential should I use?

We have also tested the ability of the different potentials to reproduce the graphitization induced by high temperature annealing of the amorphous carbons. Unexpected behaviours were unveiled. 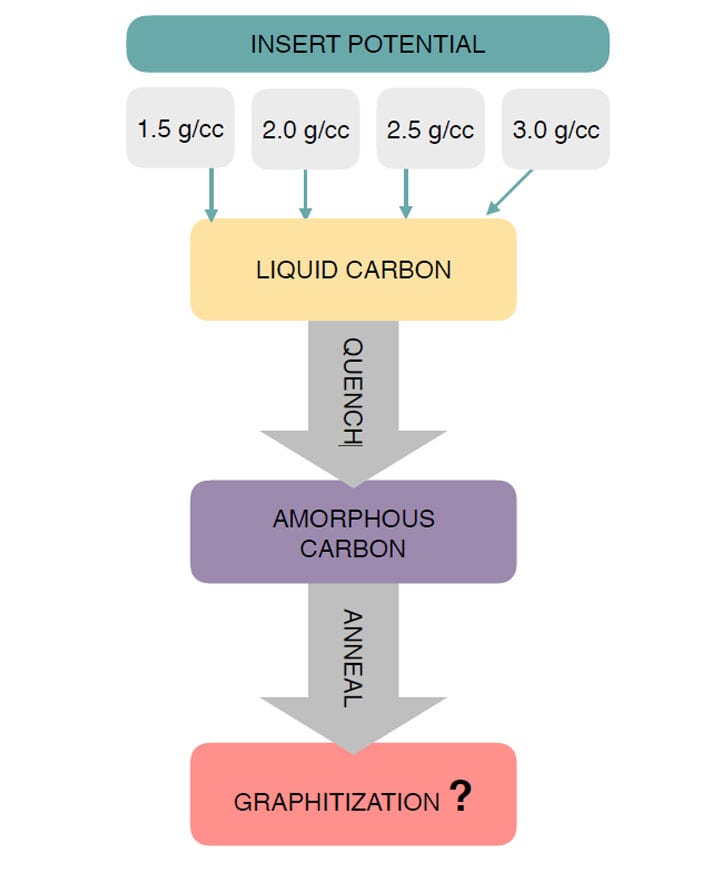 For any enquiries or to get in touch with the Carbon Group staff, contact the relevant team member on the Our People page.