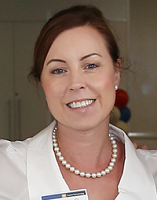 Associate Professor Loftus is a researcher and lecturer in the School of Psychology at Curtin University, Australia. Andrea is the Director of ParkC, a collaborative research group whose primary goal is to improve the quality of life of people affected by Parkinson's Disease (Parkinson’s) by optimizing collaborative research between different research disciplines and Parkinson's communities. Andrea’s research focuses on the identification and management of cognitive symptoms in Parkinson’s, and she has a particular interest in the therapeutic potential of non-invasive brain stimulation for improving cognitive function in Parkinson’s . Andrea has recently published work evaluating the nature of cognitive impairment in Parkinson’s, the relationship between cognition and sleep in Parkinson’s, and the potential of non-invasive brain stimulation for cognitive deficits associated with Parkinson’s.

Andrea's research has included motor function, cognitive function and cortical plasticity in healthy ageing and those affected by Stroke and Parkinson’s Disease. Andrea is particularly interested in the therapeutic potential of non-invasive brain stimulation techniques to improve functional outcomes for those with motor and cognitive deficits. Andrea has published extensively in her research field and is a regular reviewer for a number of different psychology journals.

Andrea is the Director of ParkC, a research centre that brings together colleagues from UWA, ECU, Curtin, the Peron Institute, and Parkinson’s West Australia (PWA). ParkC aims to improve the quality of life of people affected by Parkinson's by optimizing collaborative research that enhances the synergies between different research disciplines and Parkinson's communities. The research conducted with ParkC aims to identify subgroups of cognitive and affective deficits in PD, and to investigate the relationship between motor and non‐motor symptoms of PD. It is hoped that, by identifying subtypes of PD and what this means prognostically, that this research will be able to influence `best practice’ for altering the natural progression of PD.

Andrea has coordinated courses, lectures, and workshops at introductory and advanced levels in Psychology. Andrea currently teaches Brain and Behaviour, an inter-disciplinary unit in Health Sciences.