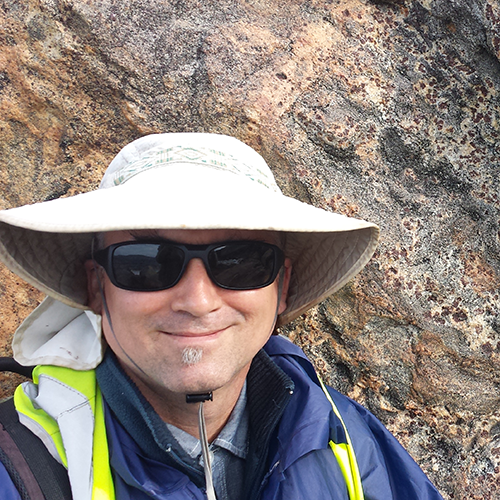 Aaron Cavosie is an American geologist, geochemist, and planetary scientist. He has published 60+ peer-reviewed scientific papers, and served as the principal advisor of PhD, MS, and BS thesis students. He has received funding from the U.S. National Science Foundation, NASA, the Australian Research Council, and other agencies. His interests involve the geochemistry, microstructure, and geochronology of accessory minerals as applied to both endogenic and exogenic processes, including the origin of granite, Earth's oldest rocks, the origin of life, meteorites, and the study of asteroid impact structures. He is currently a Senior Research Fellow at Curtin University in Perth, Western Australia.

SSTC is the umbrella for all planetary science at Curtin- check out what we're up to.

Undergraduate students: Interested in Planetary Science? There are often Honour’s projects available. Honour’s projects can start in semester 1, and can also start mid-year. Most projects focus on microanalysis of rocks and minerals; some also involve field studies.

HDR/graduate students: Interested in a PhD in planetary science? If so, reach out. Some existing projects can fund a PhD, whereas others can be enabled by scholarship.

Types of projects Cavosie is excited about

*NEW* September: Interview with ABC News about a new impact crater in Eastern Goldfields of WA

January: Article in The Conversation about the Yarrabubba impact discovery.

January: New York Times interview on article in Proceedings of the National Academy of Science claiming to have found the Australasian tektite source crater.

November: Aaron Cavosie comments on tribute article to John W. Valley, member of the US National Academy of Sciences, who recently received a $21M AUD award to study inclusions in zircon.

May: Curtin University press release about our discovery of shocked zircon in Libyan desert glass, published in the journal Geology.

Article by Aaron Cavosie in The Conversation about Libyan desert glass.

May: Article in the West Australian about natural wonders in Western Australia, including Aaron Cavosie discussing the Wolfe Creek impact crater.

Apr: Article in the West Australian with Aaron Cavosie describing occurrences of garnet in rocks near Albany, WA.

Mar: Curtin University press release about our discovery of two new impact craters, including Yallalie in Western Australia, and Pantasma in Nicaragua. Both published in Meteoritics and Planetary Science.

Additional media coverage about the discovery of Yallalie and Pantasma craters:

Feb: Article in LPI Planetary News on our new paper in Meteoritics and Planetary Science that reports shocked quartz and confirms Yallalie as the newest impact structure in Western Australia.

Feb: Article in Mining Technology on our reidite discovery at Woodleigh.

Jan: Aaron Cavosie comments to Gizmodo on a paper in Science about Earth's impact crater record.

Jan: Article in Mine Australia on our reidite discovery at Woodleigh.

Dec: Press release by the Geological Survey of Western Australia on our reidite discovery at Woodleigh.

Nov: Radio Interview of Aaron Cavosie with ABC news about a paper in Science Advances reporting the discovery of a new impact crater in Greenland.

Oct: Aaron Cavosie comments to The Scientist on a paper in Nature questioning evidence for 3.7 billion year old stramatolites in Greenland.

Jan: Media coverage of our discovery of former reidite in Australasian tektites from Thailand, published in Geology.

Jan: Aaron Cavosie comments to QuantaMagazine on the early impact history of Earth.

Oct: Curtin University press release for our paper on zircon from granite in Oman, published in Geology.

Nov: Interview of Aaron Cavosie by Sydney Morning Herald about geology as a profession, with David Wilson:

Sept: Article in The Isthmus about our Meteor Crater zircon discovery in Geology.

Nov: Media coverage of our discovery of reidite at the Rock Elm impact structure, published in Geology.

July: Aaron Cavosie comments to LiveScience on a paper in Nature about early impacts on Earth.

Feb: Media coverage of our discovery of the oldest zircon on Earth, from Western Australia, using an atom probe, published in NatureGeoscience.