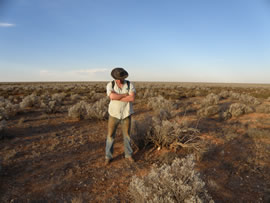 Phil Bland joined Curtin as an ARC Laureate Fellow in 2012. Prior to this he was Director of the Impacts & Astromaterials Research Centre at Imperial College London. He graduated in geology from the University of Manchester in 1991. His interest in planetary science began with a 3 year post as curator of meteorites at the Open University. He was awarded a PhD in 1995. Phil spent a sent a year as a Royal Society Overseas Research Fellow at the WA Museum before taking up a Particle Physics and Astronomy Research Council Research Fellowship at the Natural History Museum (London). In 2000 he was awarded a Royal Society University Research Fellowship.

Phil has research interests in several distinct areas in planetary science: using primitive meteorites to explore the origin and early evolution of the Solar System; understanding asteroid and cometary impacts, and the impact rate. His ARC Laureate project is focussed on identifying the source regions and parent bodies for meteorites in the Solar System by recovery of samples with known orbits. Meteorites contain a unique record. Every rock is like a free sample-return space mission. And meteorites sample hundreds of different heavenly bodies – a compositional diversity that spans the entire inner Solar System. But that most basic piece of geological information – context – the ability to link a rock back to an outcrop, is absent. In almost all cases, meteorite researchers have no idea where their samples come from. By triangulating observations of meteorite fireballs from multiple networked cameras this project will provide that context, tracking meteorites to their fall position on Earth, and back, to their origins in the Solar System.