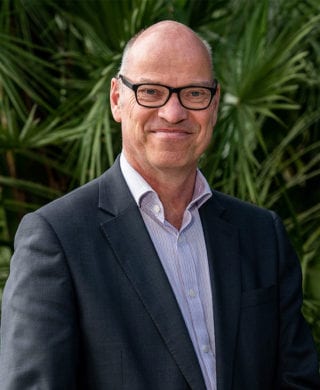 Professor Jeremy Kilburn started in his new role as Pro Vice-Chancellor of the Faculty of Science and Engineering on 25 September 2018. Prior to moving to Curtin, he worked for the University of Aberdeen for a period of three years as Senior Vice-Principal and his achievements there included providing executive leadership on trans-national education, including the Aberdeen-Curtin alliance that was announced in early 2017.

He has also worked as a Lecturer at the University of Wales, Bangor in 1988, and in 1990 moved to the University of Southampton. From 2002-2007 he headed the School of Chemistry, and from 2007-2010 he was Dean of the Faculty of Engineering, Science and Mathematics at the University of Southampton before joining Queen Mary in September 2010 as Professor of Organic Chemistry and Vice Principal Science and Engineering. Over the last 20 years, Professor Kilburn has established an international reputation both as a respected chemistry researcher and in leading the expansion of important industry and global partnerships.

Professor Kilburn graduated from Cambridge University with a degree in Natural Sciences in 1983. He stayed in Cambridge to study for a PhD under the supervision of Ian Fleming, working on the chemistry of beta-silyl-enolates, and completing a total synthesis of the antibiotic thienamycin. In 1986 he moved to Columbia University in New York to carry out post-doctoral studies with Clark Still, where he worked on host guest chemistry and the development of synthetic receptors for small organic molecules.

His research interests include organic synthesis methodology and natural product synthesis, supramolecular chemistry, and application of combinatorial chemistry to design of synthetic receptors and most recently to development of modified electrodes for bio sensing and fuel cells.