The Australian Journal of Labour Economics (AJLE) is a forum for the analysis of labour economics and labour relations. It is particularly focused on theoretical and policy developments in respect of Australian labour markets. Interdisciplinary approaches are encouraged. 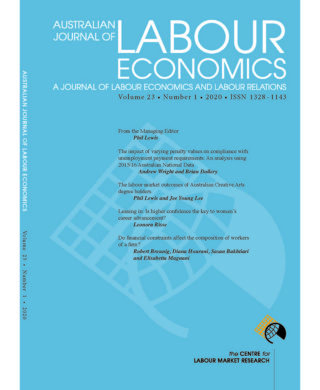 While contributors to the AJLE are expected to demonstrate theoretical or empirical originality – and preferably both – they should make their work accessible to readers from a non-technical background. Survey articles are also encouraged. Further, as a means of strengthening the integration of theory and practice the AJLE welcomes reflective contributions from practitioners. The AJLE recognises that the areas of labour economics and labour relations are subject to controversy and aims to provide an arena for debate.

Submission of articles should be sent to: Sandie Rawnsley at ajle@curtin.edu.au

Welcome to the first issue of the Australian Journal of Labour Economics (AJLE) for 2022 (Volume 25 No 1). In this issue we have a range of articles which will be of interest to our readers covering a range of labour market issues and using a variety of approaches to research.

The Style Guidelines must be adhered to when submitting an article for the Australian Journal of Labour Economics.

Direct all correspondence to the Editorial Assistant: